Denso Helps Cool Off the City of Toronto

Deep water cooling of the downtown core of a major city—pretty innovative thinking. Soon office towers and buildings in Toronto’s downtown core will be cooling off with water drawn from the chilly depths of Lake Ontario, and they will be protected with Denso corrosion prevention products as well!

In an expansion program deep below the city streets and in particular below the convention hall and cultural arts centre, a project was underway that was designed to use cold water from the depths of Lake Ontario to provide air conditioning to the complex of high-rise office and residential towers in Toronto.

The high-rise towers need year-round cooling and they are conveniently located beside a body of Lake Ontario water that reaches 85 metres in depth less than 5 kilometres offshore. This body of water also is permanently just above freezing (4.0 degrees Celcius).

By using this cold water, the Deep Lake Water Cooling project would replace air-conditioning technology that relies on electricity and fossil fuels. The project is capable of servicing 20 million square feet of office space (100 high rise towers) and is expected to reduce annual carbon dioxide emissions by 40,000 tons and use up to 75% less energy than conventional electric chillers. This leads to significantly lower levels of pollution as well.

There is an additional benefit to this project. Spent water from the cooling phase is passed through a cold-energy transfer loop back into the city filtration plant to produce cooler potable drinking water for downtown.

The mechanics of this project begin with drawing cold water through three parallel, 600mm HDPE intake pipes from a depth of 85 metres, 5.6 kilometres south of the city out in Lake Ontario. These pipes are buried where water depth does not exceed 10 meters, in order to protect them from damage from large wave and current loads as well as marine traffic and anchors. Where water depth is greater than 10 meters, the pipe is laid on the lake bottom. Screens are provided at the intake to prevent fish and other organisms from entering.

At these extremely cold-water temperatures, there is only one tape product that can withstand this type of cold and still be flexible enough to be applied to pipes and fittings while in operation. The tape must also show all the attributes of petrolatum tapes and provide long-term corrosion protection and sealing. The product selected for this massive project was Denso LT™ Tape, along with Denso Paste™ and Denso Profiling Mastic™.

The application involved assembling 1200mm flanged joints, which connected two steel pipe sections complete with a valve assembly. The sections were built on their ends, offsite and when put together stood about eight feet tall. The application of Denso Paste went around the nut and bolt assemblies and the pipe sections along with a large amount of Profiling Mastic to fill the many voids. The irregular configurations on this section really highlighted the conformability of Denso Petrolatum Tape, which to the delight of the applicator made his job easier.

Once completed, the concrete lined assemblies weighing several tons had to be moved by crane onto a truck and then transported to the jobsite 60km away. Once onsite, the assemblies were lowered about 80ft below the road surface down to a tunnel, which had been bored using a huge vertical drilling machine. The tunnel runs from Lake Ontario where the large diameter water pipes were then connected with the assemblies to the piping that runs underneath the city. Once the large diameter piping was protected and connected, the small diameter feeder pipes and valves that connect to the various office buildings were protected with the Denso™ Petrolatum System.

The uniqueness of this project offered insight into the environmentally sound potential for alternative ways of cooling. The project also allowed Denso to be part of this leading-edge technology; the first of its kind in Canada and one of very few in the world. 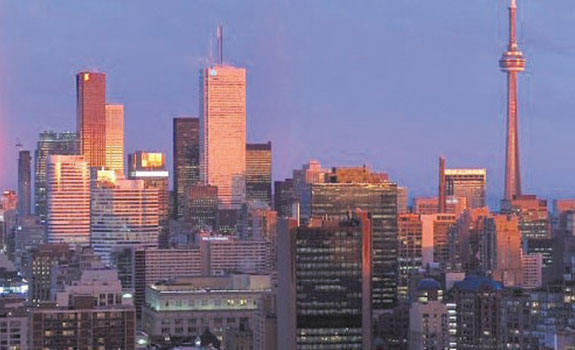 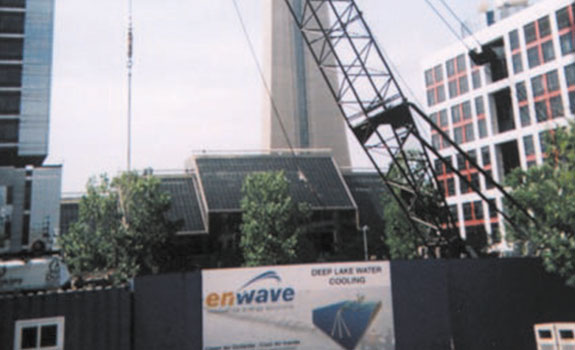 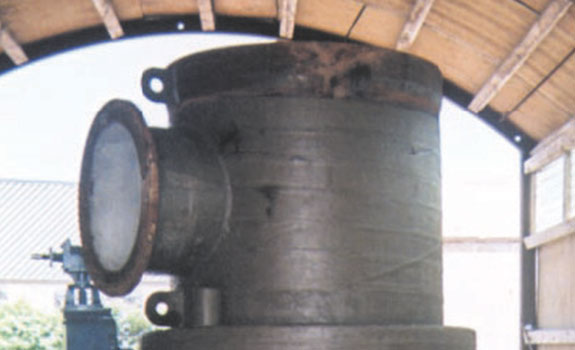