Aiding in the Health of a Pipeline

Canada’s abundance of oil is primarily in Western Canada and must travel great distances in order to bring this natural resource to market. A massive infrastructure of pipelines is in place where many thousands of kilometres of small diameter liquids production piping eventually ends up flowing into much larger diameter transmission piping which brings crude oil to refineries and refined product to bulk terminals and tank farms across Canada and the United States of America.

After a pipeline is buried and commissioned its life begins, and during the course of which the pipeline will be subject to many forms of inspections, evaluations and resulting treatments. Based on a wide variety of variable circumstances and environments a pipelineʼs physical condition will deteriorate over time and subsequent remedies must be applied in order to bring it back to its original health.

The following is a snapshot in time of one such situation on Canadaʼs largest liquids pipeline transmission system.

Inspection methods such as Ultrasonics (UT) and Magnetic Flux Leakage (MFL) are commonly used to pinpoint weaknesses in the pipeline, a large part of which are caused by corrosion. In this particular scenario the owner company ran a MFL tool through sections of pipeline stretching hundreds of kilometers and as a result of the inspection, potential problems were identified in a few locations.

The next phase of the project was to expose the sections of buried pipeline where the ʻsmart pigʼ had logged anomalies, remove the existing coating and perform a more detailed inspection on the problem areas and determine a corrective course of action. Once final visual and technical evaluations of the pipeline were performed, the identified areas were either reinforced with weld-on mechanical steel sleeves (which was the norm) or deemed in satisfactory condition. At the end of the inspection process all areas needed to be re-coated before back-filling the pipeline which is where Denso got involved.

Working with the owner company, third party inspection and the coatings applicator, Denso came to the table providing technical advice and the proper materials to reinstate the health of the pipelines coating system. The system needed had to be one that could be applied in the field under varying conditions on a pipeline that was in operation. For this surgery, the Denso Protal 7250™ was utilised on the majority of the length of pipeline that had been stripped of the original three-layer polyethylene coating.

After a short period and after the Protal 7250 epoxy had set, the final requirement of the surgical operation required the newly installed 7250 be tied into the existing three-layer polyethylene coating at either end of the repair. This last step was accomplished by using Denso Hotline™ Tape to transition the two coatings and to ensure strong mechanical protection on the 42” diameter pipe transition coating, Denso Glass Outerwrap™ was utilized. The final result was a good, reliable in-situ coating rehabilitation system that leaves the owner company feeling confident about the health of their pipeline. 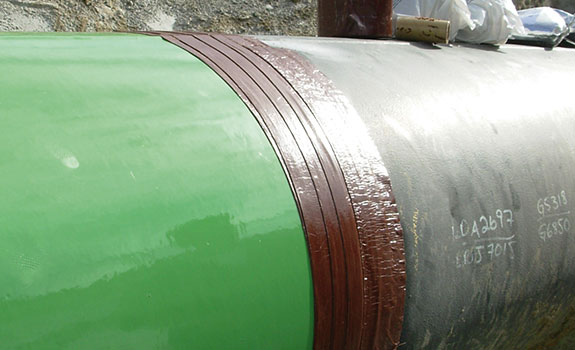 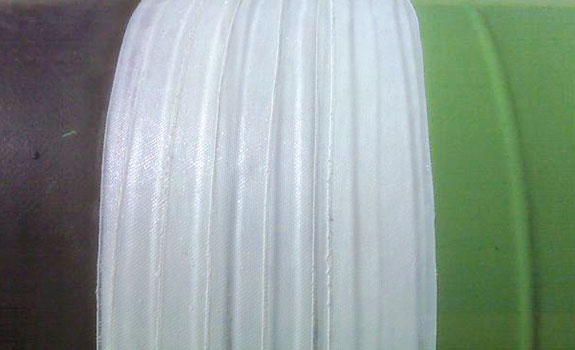